The recent fall in the price of Tether (USDT) has been interesting on multiple levels, including its potential systemic risk and the conversation it has sparked over the role of stable-coins in the crypto ecosystem.  One side effect that has not been discussed, however, is that it has demonstrated the need for a better price benchmark for Bitcoin and other Crypto Assets.

Not surprisingly, as USDT has fallen vs the US dollar, the premium paid by traders for crypto assets such as Bitcoin and Ethereum denominated in USDT has expanded proportionately.  (That behavior, coincidentally, is precisely how markets should operate.)  The consequences of this price action, however, is that pricing “indexes” that include USDT based pricing in their dollar price of crypto-assets have become wildly inaccurate, overstating the price of these assets by as much as multiple percentage points.  This stands in stark contrast to a benchmark such as CoinRoutes RealPrice tm, which shows the mid-market price to buy or sell fixed quantities from a consolidated order book of all the exchanges that allow US clients to trade and freely deposit & withdraw US Dollars from their accounts.   To put this difference in context, consider the comparison of  RealPrice vs services such as CoinMarketCap and the headline number in CryptoCompare.  Here are some side-by-side screenshots from earlier this week:

Notice how, in both cases, the RealPrice tm is over $100 lower than the headline price for BTC on both services and the RealPrice for the other cryptos are also much lower.  The reason for this is that those services include USDT based prices from exchanges such as Bitfinex in their calculations.  To underscore this point, look at the following chart of Bitcoins best bid and offer for the past several days with Bitfinex included alongside the exchanges we utilize in RealPrice.

Notice here, how the premium of Bitfinex’s bid over the best offer from all the other exchanges spikes during the initial selloff of USDT and then stabilizes as USDT stabilized at a level around 95.5 cents to the dollar.  (editors note – in the past two days, USDT has moved higher to around 96.5 cents per dollar)

In addition to the price impact, there have also been liquidity impacts from USDT breaking free from its peg.  A few weeks ago, when running the CoinRoutes Cost Calculator to assess the displayed liquidity for bitcoin, the market was different than it is today.  Last month, the ability to sell $10 million in Bitcoin (1600) was significantly cheaper in USDT, showing a total cost, net of exchange fees of under 70 basis points, while selling the same 1600 Bitcoin vs USD averaged nearly 1%.   Now, running the same simulation, the results are almost the same for USD as USDT.  The following graphic shows the CoinRoutes Cost Calculator results for selling 1600 BTC in USD at around 4pm on the 17th.  Notice how the proceeds, net of exchange fees is 6374, while the first bid price was 6437.  This represents a “cost” of $63, which is almost exactly 1%. 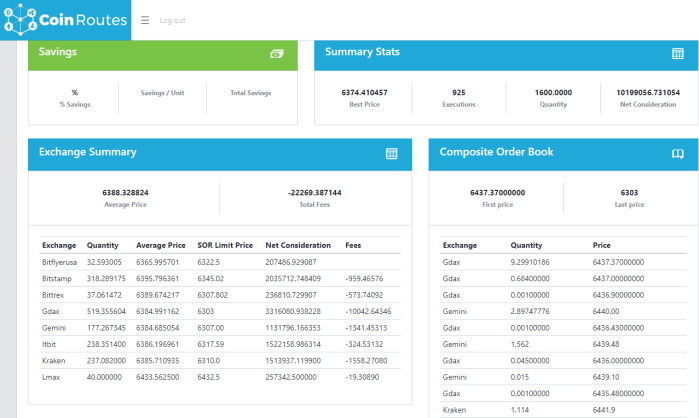 Next, look at a Cost Calculator example from the same time on the 17th for selling 1600 Bitcoin in USDT.  Notice that the net proceeds from this simulation in Tether was 6672, while the best bid was at 6735, which is the same $63.

As a result, while the Tether situation is certainly disconcerting, it appears like the market is digesting it calmly and rationally.

It is worth restating the most important point, however.  As long as popular websites are mistakenly representing the prices of Bitcoin and other Cryptos, it is damaging to the integrity of the market.  Regulators, including the SEC have cited the lack of price certainty and the poor understanding of available liqudity among retail investors as an important concern.  (and was cited as one of the reasons for denying petitions to list Bitcoin ETFs)  The good news is that there are accurate pricing benchmarks available, such as provided by CoinRoutes.  As these become more generally available, it will result in improved markets and higher investor confidence.